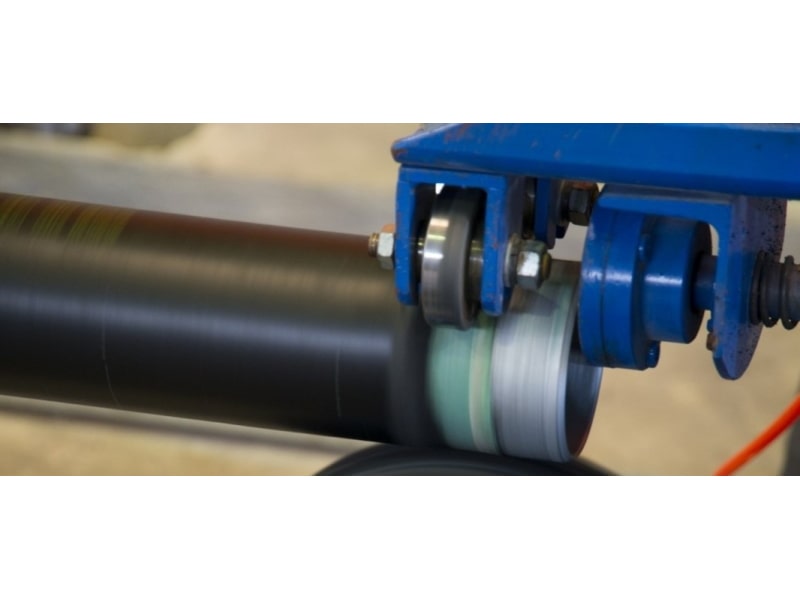 3LPE Coated Pipes
Three-layer Polyethylene (3LPE) coating in accordance to DIN 30670
A three-layer polyethylene coat (3LPE) is multilayer, anti-corrosive steel pipe coating. The three layers consist of an Epoxy layer followed by an adhesive layer and a polyethylene layer, as illustrated in figure 1: 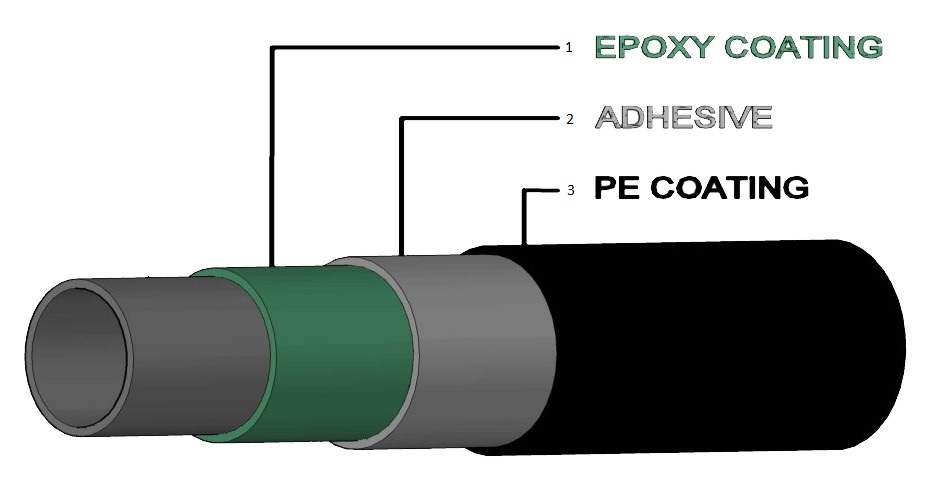 figure 1
⦁ Epoxy layer: protects the steel portion and improves the adhesive surface.
⦁ Adhesive layer: improves the adhesion of the polyethylene layer for the epoxy layer and increase its resistance to peeling.
⦁ Polyethylene layer: Protects the pipe from any mechanical damage or corrosion, and works as an electric insulator to the steel pipe.
Features and Benefits:
⦁ The 3LPE is designed to provide long-term protection to the underground steel pipes, and fights against corrosion caused by soil minerals.
⦁ The layers provide tough and durable protection for pipes.
⦁ Mechanical Protection: The Polyethylene layer protects the pipes during transportation and installation, which consequently reducing costly repairs.
⦁ It also offers strong chemical resistance that makes 3LPE applicable even in the most aggressive of environments, including all forms of soil. The chemical resistance of this coating prevents corrosion.
⦁ 3LPE can be applied on the outer surface of both black and galvanized steel pipes.
Production Stages:
⦁ Steel pipes are fully cleaned of dirt and scales using the shot blasting method.
⦁ The pipes are heated using an induction heater set to the suitable temperature, so that the Epoxy powder adheres to the pipe’s outer surface, forming the epoxy layer.
⦁ Epoxy powder is applied to the pipe’s surface by an electro–static spray process to a minimum thickness of 60 microns.
⦁ A special PE adhesive layer is applied to the pipe’s surface using the extrusion method. This layer provides good adhesion between the epoxy layer and the polyethylene, at a minimum thickness of 140 microns.
⦁ A Polyethylene layer is then applied using the extrusion method according to the exact specifications and technical requirements. The Polyethylene layer provides protection against mechanical damage and other environmental factors.
⦁ The pipe is cooled immediately after extrusion for safe handling and inspection.
⦁ A special machine performs 100 mm cut-back.
⦁ Marking and packing is completed for easy traceability and storage.